The faster 1.5GHz 64-bit quad-core CPU on the Raspberry Pi 4’s Cortex A72 SoC, coupled with the up to 8GB LPDDR4 RAM give performance comparable to entry-level x86 desktop PCs.

The Raspberry Pi 4 moves to USB-C power meaning that you’ll need a new USB-C power supply that can supply 5V at 3A.

There are dual micro-HDMI ports that support up to 4Kp60, to use your Raspberry Pi 4with much larger displays with crisp, sharp, high resolution.

For the first time, you’ll be able to use dual HDMI displays with the Raspberry Pi.

The new chipset supports Bluetooth 5.0 (from 4.2 on the Raspberry Pi 3 B+) and also dual-band802.11 b/g/n/ac wireless LAN, like the previous generation Raspberry Pi, for quick wireless networking with less interference and better reception. 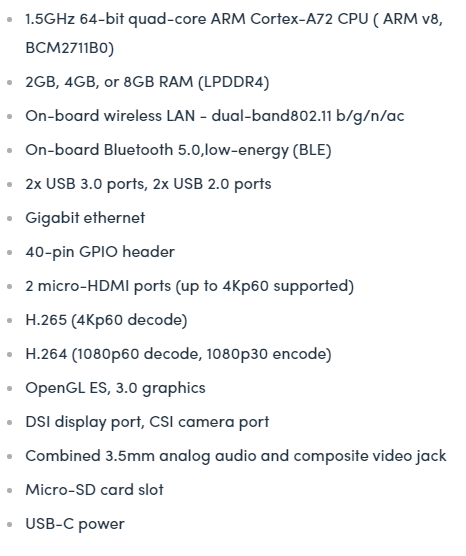